The first Chaz Bono photos have appeared. Formerly known as Chastity Bono before her sex change operation, the 40-year-old daughter of Cher and Sonny Bono announced he was undergoing gender realignment therapy only a week ago. At 18, Chastity came out as a lesbian while studying at New York University and later became a prominent gay and transgendered rights activist.

In the ensuing years, Chastity Bono's rock career dissolved after her band Ceremony's debut album failed to become a hit, and she turned to film production. A stint in rehab in 2004 and battle with obesity has plagued his recent years. A publicist for Chaz Bono has said, "Chaz, after many years of consideration, has made the courageous decision to honor his true identity. He is proud of his decision and grateful for the support and respect that has already been shown by his loved ones."

Reportedly, Chaz Bono has only started taking hormones within the last two weeks with a surgical operation in the works. 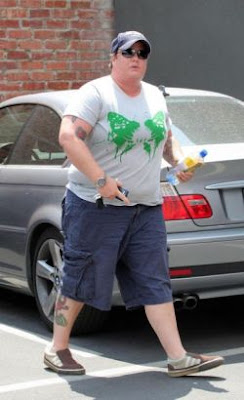 Chaz Bono as a man