Winamp is one of the most popular media players in the world behind only Microsoft's Windows Media Player, but many of you may not realize that it can also be used to watch streaming TV and videos. These streams are transmitted using the Nullsoft Streaming Video (NSV) format, which is less well-known than the Windows Media and QuickTime formats.

You can access the Internet TV function by right-clicking on your Winamp player and selecting Library or Media Library, depending on what version of Winamp you have. The player will automatically download a list of available channels. The predominant channels focus on cartoons and adult entertainment with a smattering of movies and music videos in between.

You can also check out a site called DontWatchMe, which has a list of available channels that you can click on to launch in Winamp. In many cases, you won't be able to access a SHOUTcast stream because there are too many users so just move on to the next one. Persistence should eventually lead to an open stream. 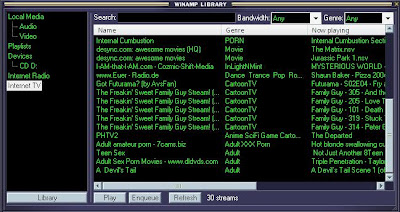 you have http://www.leela.tv and you can watch over www browser and you dont need a winamp!!!