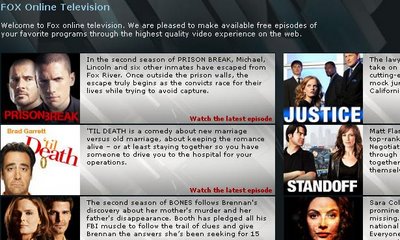 If you missed an episode of your favorite show, have no fear since it's likely to be available online at the major network's sites. While none except NBC allow downloads of the shows, the quality of the video is watchable, but you do have to sit through some ads. These services allow you to quickly watch a show instead of spending hours downloading it off Bittorrent. People not in the US might not be able to watch the shows directly so a US-based proxy might be advisable if you don't want to wait the 6 months to a year it takes for the episodes to get syndicated to where you live. This post at gHacks can help you get started.

NBC: Heroes and Studio 60 (Note: Only people with Intel Viiv or Centrino-based PCs can download, but anyone can watch the shows)

The CW: No full episodes, but there are opening scenes of upcoming shows available (Smallville, Veronica Mars, and more). There is also the CW Lab, which allows you to mashup pre-selected video and audio.

thats bullshit that there are NO SMALLVILLE episodes on here. fuck

Anyone can watch the episodes? Then why do I get a message saying "we're sorry but the clip you selected isn't available from your location".

Which means you can only watch them is you life withing the USA, that sucks, big time.

This is complete shit. Americans only? Right.

innetube is terrible, i could not watch a smooth replay even with a cable connection!

hey the best way i found to get any episode of smallvile is through Limewire because you searh for smallville, then it comes up with all the people that are online that has "smallville" in the name. YOU HAVE TO DOWNLOAD LIMEWIRE TO USE THIS.Seach limewire through google to find it and it's free. I have season 6 and all of 7 that has been on there. I plan on posting it in a compressed folder and calling "Smallville season 6" the folder will be huge and it will be a compressed folder. so after you download it and compress it then you watch it on almost any media player cause it is avi file.

Email me @ Soccer21champ@gmail.com if you have any question but you have to title it limewire if you want me to help you.

Ok so my first comment is that pretty much all of the official sites from the TV stations suck. Especially NBC ...or which ever one uses innetube.
Second - if anyone wants to watch episodes of a show you should check out surfthechannel.com - sometimes it can take a while for the episodes to load, but they have tons of shows and usually the full season. Another upside to this site is that EVERYONE can watch it - even people outside the US. Also, if one episode has been removed or is dead, they will often have another link that may have the episode.

The CRTC is stopping us from watching the episodes it is not the Americans fault.

Canadians whine to much!

wtf why is it American only? Is it because Americans are so stupid and lazy that they can't get off their computer to go watch it on the tv instead??

Who said Americans are stupid? We do what we want, when we want. So fuck you. And yes, we are lazy. But that is because we can afford it. If you don't live in America it is because you are no fun and will probably have to work hard your whole life. Sucks to be you.

Oh, I almost forgot. Mexicans are some poor people, but at least they have the sense to come to America anyway. Good for them, but bad for American citizens...unless we need some lawn work done for a cheap price.

You know America is here because immigrants. This is a melting-pot society. And it rules.

Have you ever taken into consideration that maybe Americans are not Lazy but in fact VERY hard working and do not have the time to sit in front of a TV while the shows that we like are on so we resort to watching them on line..And there is no reason to talk shit about AMERICANS just because some stupid websit is not available to the people outside the US. So if you want to talk shit talk shit about the web developers that set up the WEBSITE..And if you want to watch AMERICAN TV so fucking bad you have three options.
1. You can move here (but not sure if we would want you with you talking shit about the AMERICANS the way you are, but then again our government seems to be letting just about anyone in these days)
2. Design your own website
3. Watch TV shows from your own country...If you think that we are so fucking STUPID then why in the hell do you watch our TV

Who the fuck watches Smallville anyway???!!! I can go to fox.com and watch full episodes of Prison Break..seasons 1 up to the current fourth/3rd episode..AND DL the video with a browser plug-in that I have!! So HA! Im sorry I am American and proud and know how to work a PC and get things done that I need done! Go eat some pizza with Canadian bacon on it..it tastes like shit anyway.AND YES WE ARE TOO BUSY WORKING AND HAVING LIVES TO PLAN OUR DAY AROUND A TV SHOW..THATS WHY TV SHOWS ARE PUT ONLINE THE MINUTE THEY FINISH AIRING SO WE CAN WATCH THEM AT OUR LEISURE..AND IF YOU CANT FIND A SHIT SHOW ONLINE THAN TOO FUCKIN BAD..YOUR COUNTRY MUST SUCK AND THE GOVERNMENT HATES YOU ALL HAHAHAHAHAHA!!!!

yeah well idk who said that you cant watch full episodes on cwtv.com but thats bull i work and sometimes miss smallville or supernatural and i always catch up online.

i would like to think that americans arnt stupid accept bush got voted in by americans twice, and they now they have a financial meltdown. melting pot society where the post it'self melts due to their own stupidity

wow no lol you are all dumb go to ch131.com and yes americans are stupid and lazy and no u cant afford it have you seen the stock market you guys had to print a new $700 billion dollars because you cant afford your own housing loans