« Home | OfficeMax Gets Infected for the Holidays » | Learning from Google Zeitgeist Top Searches » | Ask X » | AOL and Its Discontents Doom DMOZ (Open Directory ... » | Turn Your Mobile Phone into a Radio » | Time's Person of the Year is You » | Why Numbers are the Future of the Mobile Web » | What You Can Learn From the Top Searches of Yahoo,... » | Openserving Offers Free Blog Hosting » | Reddit User Data Stolen »

There's been a lot effort put toward developing better search engines with most of the attention on improving natural language processing algorithms. The other approach is to use the most powerful natural language processor around: you. This is the approach taken by Yoople, a search engine powered by its users. It's like Digg for search engines: you can drag-and-drop search results, essentially voting for the best results and burying subpar ones. It reminds me a little of ChaCha, which is a search engine that pays people to help users find the right information. Recommended results get a boost in ranking.

One fun term to search for is "pizza", or just click the I'm Feeling Pizza button. It's probably the best way to see the power of Yoople, or lack thereof, since a relatively large number of users have sorted the results. Domino's Pizza leads the pack followed by Pizza Hut. 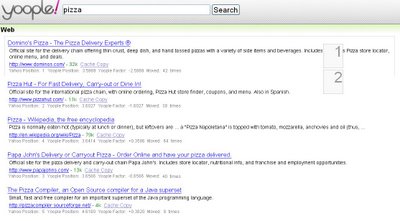 You can see from the results that past the first five, there isn't any significant user activity, meaning that not too many users have moved the results around. That tracks with the fact that few searchers go past the first page of search results, and apparently, even the results on the first page that are "above the fold", in the top half of the page. Since Yoople uses Yahoo's search results as its baseline, you can compare its results with Yahoo's using the Yoople factor, which is just the difference between a result's Yoople and Yahoo position.

As with any collaborative filtering site, Yoople faces the problem of filtering out users who aren't motivated by voting for the best results, but by self-interest or plain vandalism. Then there's the problem of dealing with an infinite variety of search terms. Although the most popular searches will likely be sorted by hand, those in the long tail will probably be overlooked since they are so uncommon, but that isn't going to be too big of an issue for most users.

In the short term, I don't see this going anywhere since sorting search results has limited communal appeal. It's boring. Maybe if comment threads were attached to each result like at Digg or Reddit, and users could debate with each other about the result's relative merit, Yoople could be more than a novelty. As it is, user engagement is limited, and social sites wither without it.