« Home | Why Numbers are the Future of the Mobile Web » | What You Can Learn From the Top Searches of Yahoo,... » | Openserving Offers Free Blog Hosting » | Reddit User Data Stolen » | Learn What Every File Extension Means » | Streampad Offers Web-Based Music Mashup » | What Happens to Your Body If You Drink a Coke Righ... » | Google Makes Patent Search Easy » | StumbleUpon Videos » | Microsoft Release Patch for Dangerous Wireless Vul... »

Time's Person of the Year is You

After naming YouTube its Invention of the Year, Time Magazine has proffered forth its pick for Person of the Year: You. The editors clearly recognize the impact user-generated content (UGC) is having from YouTube's millions of user-submitted videos to the buzz of the blogosphere analyzing events as they occur in real-time.

Of course, much of it is hype: it's true that individuals are starting to have an impact in shaping public discourse and affecting corporate decision-making, but a lot of what's happening is simply response and not stimulus. Oftentimes (most of the time), blogs don't make the news; they follow what's reported in the mainstream media, or MSM. 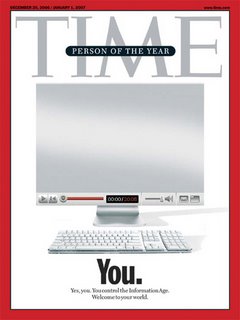 But look at 2006 through a different lens and you'll see another story, one that isn't about conflict or great men. It's a story about community and collaboration on a scale never seen before. It's about the cosmic compendium of knowledge Wikipedia and the million-channel people's network YouTube and the online metropolis MySpace. It's about the many wresting power from the few and helping one another for nothing and how that will not only change the world, but also change the way the world changes.

Time's Person of the Year is You