Control Bittorrent From Anywhere in the World

The lightweight Bittorrent client µTorrent has released a beta of its WebUI interface that allows users to control the client over the web. The main advantage of µTorrent is its compactness: the total package weighs in at less than 300KB. With this new tool, users can check to see if a transfer has been completed or schedule a new one. The only real disadvantage of µTorrent is that plugins aren't supported though it's understandable since they can quickly take up space and slow things down.

I didn't used to use µTorrent as my default Bittorrent client, but that might change now. From what I've seen, it's an impressive piece of software. The best part is its small memory footprint. There are some nice touches like automatically adding µTorrent to Windows Firewall's exceptions list and the option to randomize ports to get around ISP throttling. The search box is also very handy. 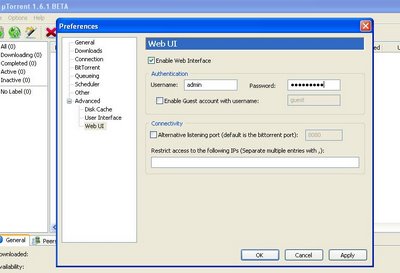 Control Bittorrent From Anywhere in the World