How to Get Free Hotel or Campus Internet Access

Where do you think you're most likely to get Internet access for free? A five-star hotel or a student hostel?

In many cities, it seems like you have a better chance of getting a free Internet connection (even wireless access) at the hostel even though you're paying ten times less than at the five-star hotel.

But say you're willing to shell out to get connected from the convenience of your hotel room. However, you also have more than one computer (you're sharing the room), and you're charged for each computer that you hook up even though you can only connect one computer at a time (you're using an Ethernet cable to connect since you can't get wi-fi).

Well, you don't want to be gouged more than you already are so you do some thinking.

You realize through some trial-and-error that the hotel's network distinguishes computers based on their MAC, or physical, address, which is a unique number that identifies the networking hardware in your notebook. So no two computers should share the same MAC address.

But what if you could clone the MAC address of a computer that's already connected?

If you don't know the MAC addresses of computers that are already signed up to the network, then you'll have to connect one computer and pay the Internet access fee (but only once).

1. Now go to the Start menu of the connected computer, select Run and type in "cmd" to bring up the command line.

2. Type in "ipconfig /all", which will bring up your laptop's hardware configuration. The important line you're looking for is "Ethernet adapter Local Area Connection". 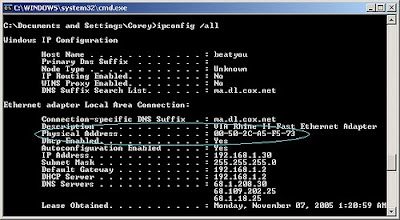 3. Under this heading is the line "Physical Address", which is what we wish to clone on another laptop. Write down the six groups of letter and number combinations for use later (ex: 00-DE-AD-BE-EF-01).

4. Then download SimpleMac and install it on your second laptop. Ideally, you should already have it downloaded, but you can always transfer it from the laptop that you have connected via USB cable or Flash memory card.

5. After you start SimpleMac, it will automatically pull the physical address of your laptop and let you change it to whatever you like. 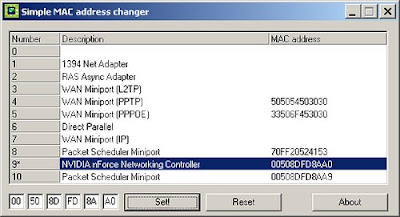 6. You should see a line that includes the words "networking controller" such as "NVIDIA nForce  Networking Controller" or whatever brand of NIC you have installed on your laptop. Click on it, and enter the MAC address that you wrote down in step 3.

8. You may need to disable and then re-enable your LAN for the changes to take effect.

9. You're done! Connect the Ethernet cable to your second laptop and start surfing.

By the way, this same technique applies for getting connected to a university campus' network if you aren't a student (you just need to know the physical address of a computer that's already connected which you can find out using steps 1 to 3).

How to Get Free Hotel or Campus Internet Access

Cool, Probably I can test one day, if I live in university hostel. Have you tried before?

Very well! Thanks for tutorial.