Over the course of 30 sessions and about 100 games, Lumosity promises to put your brain through a rigorous fitness program that will increase your IQ. The games were apparently designed in consultation with scientists from Stanford and UCSF and are broken down into sections like attention, memory, processing speed, and cognitive control.

It's hard to tell how credible the claims are given that testing was done through the Internet instead of a controlled setting, but a cursory look at the research findings is somewhat encouraging if you're willing to endure 20 minutes of brain exercise a day for five weeks.

The first game you'll be asked to play is a birdwatching task that will train your peripheral vision. Not exactly the most exciting game, but if you have nothing better to do, it's probably worth trying it out for a chance to get smarter. 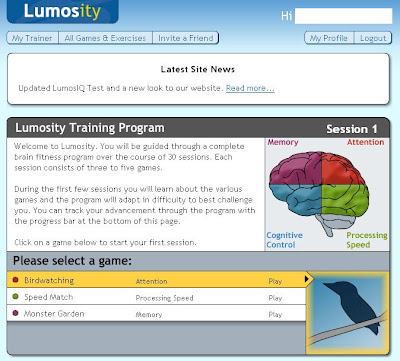