Hiding data in a PDF file by drawing a black box over the text has gotten the military in trouble before. All it takes to read the information is to copy-and-paste the redacted text into something like Word or Notepad.

Joost apparently didn't get the memo. A Joost presentation called "Joost Network Architecture" given on April 4, 2007 was posted online for everyone to see with key portions blacked out. As Mashable was informed, this turned out to contain key information about deals that Joost was trying to close with major content providers as of late March. A total of 61 deals were detailed, including deals with Sony, ITV, and CNN.

Most of the document deals with the P2P architecture underlying Joost's network with discussions of hardware and protocols. They are calling it "Joost P2P Magic".

The original PDF has been taken down, but an HTML version can be viewed courtesy of Google cache. You might have to highlight the text to see anything. 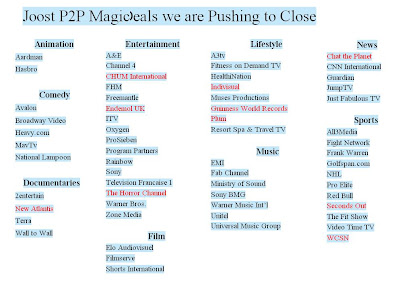