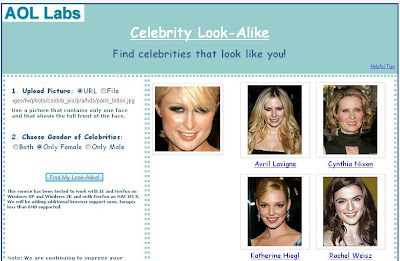 Which celebrity does Paris Hilton look like? According to AOL, close matches are Avril Lavigne, Katherine Heigl, Rachel Weisz, and Cynthia Nixon. A second image test matched Lavigne and Heigl again along with Christina Applegate and Cate Blanchett, but again no Hilton. Would Paris be offended? 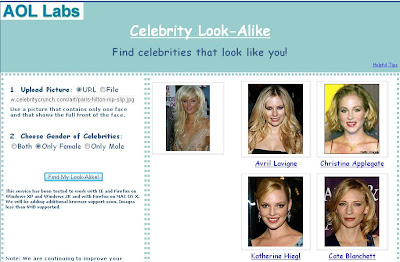 Celebrity Look-Alike is the site where you can play around with some new facial recognition algorithms developed by AOL Labs, Oxford University, and Caltech University, according to an email we received. To find look-alikes, you upload a picture from either a file or URL, and you'll get back a group of four celebrities that most closely match your picture.

Since only 500 celebrities are covered in the database, it isn't surprising that results aren't too robust, but Celebrity Look-Alike has the feel of a product that could go viral very quickly regardless of its current limitations.