« Home | Got Blog?: You Might Be Depressed » | Flickr Goes to the Dark Side: Angers Entire User C... » | Windows Vista Launches: Is Your Computer Ready? » | Tape It Off The Internet Launches in Beta » | Google Books Get Put on the Map » | Don't want New Blogger? You Don't Have a Choice... » | Watch Unaired Episodes of Daybreak Online » | Supercharge Internet Explorer 7 with Crash Recover... » | Temporary Post » | Secrets of Laptop Ergonomics »

Technorati WTF!: Not a Digg Clone

Technorati has launched a new product called WTF, which stands for Where's the Fire...not that other acronym. While some bloggers have called it a Digg clone, it's actually more of a Wikipedia for explaining what's hot and why. So, the goal is to explain why something's hot, cool, or popular not simply report on it.

Yes, there is a voting system where the best explanations rise to the top, but it's more Yahoo Answers than Digg. You can see from the screenshots below that the explanation for WTF has been slightly rewritten. The first was taken by Steve Rubel yesterday. Today's explains the purpose a little more clearly.

I think Technorati has hit on something here. If you've missed out on the latest buzz, WTF can provide a explanation for its whys and wherefores. Sounds great for frequent travelers or even the non-technophile who wants to get what's going on. 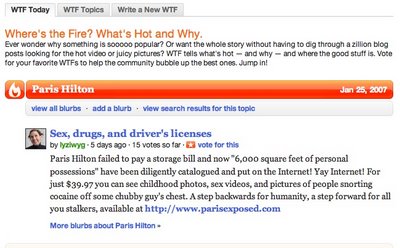 Technorati WTF!: Not a Digg Clone