Tape It Off The Internet Launches in Beta

Tape It Off The Internet (TIOTI) has now launched in beta with the lucky first 20,000 users able to sign up for accounts. Each user also gets five invites to spread around. At first glance, TIOTI is a very slickly designed filesharing site that incorporates many social features like top 10 lists, tagging, and friends. Unlike BitTorrent sites like The Pirate Bay or Mininova, this site looks like it's trying to be a real business and incorporates lots of Ajax and slick Web 2.0 design.

Right now, it doesn't look like users can download any episodes yet. The idea is to incorporate download links to BitTorrent files and, possibly, places like Apple iTunes. Amazon.com affiliate links are already on the site however.

There's a nice recommendation engine that recommends TV series to you based on the ones that you've favorited. As for social aspects, the biggest groups so far are centered around Lost and Heroes. You can also find out who else on the site likes the same shows as you do.

I can see TIOTI as a social networking site for fans of different TV shows to come together. However, it's being marketed primarily as a P2P filesharing site at present. I'm guessing this is phase one of their strategy to drive traffic with the filesharing aspects gradually fading away from future legal pressures.

If anyone wants an invite to TIOTI, drop me a line by email or comment below. 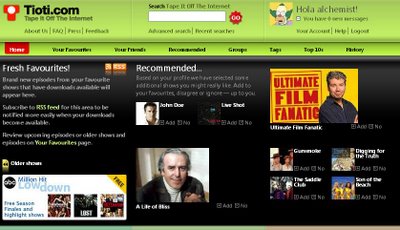 Tape It Off The Internet Launches in Beta

Hey great review as it is informative than others I looked at.

Can you send me an invite if you have any.

Great blog with in depth analysis and feature discussion. Keep up the good work!

Give me your email address and I'll send you an invite. You can email me at 20firstc (at) gmail (dot) com.