RealNetworks is showcasing one free movie a week on its Film.com property. They're looking to stream films from up-and-coming filmmakers through 2007. Naturally, you'll need RealPlayer to view the films.

The first covers the Craiglist phenomenon and is titled 24 Hours on Craigslist. Here's the synopsis:

24 Hours on Craigslist is an honest expose of a day in the life of the craigslist community in the city where it all started: San Francisco. Filmed entirely from user posts, the documentary provides a glimpse of the variety and breadth of the experiences of the website’s users. Eight film crews, also found through a single post on craigslist, were sent to film 121 different stories posted on August 4, 2003. 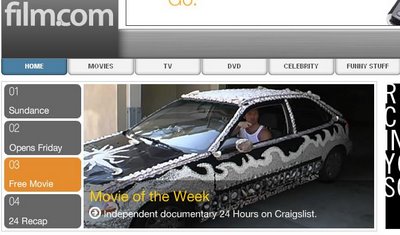