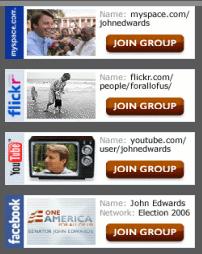 2004 Presidential candidate John Edwards is at it again. Seriously, he's running for president. This time he's using the power of the Internet to jumpstart his campaign with a video on YouTube. You might recall that Howard Dean parlayed Internet prominence into a seemingly viable campaign back in 2004 that ultimately fizzled out.

Like John Kennedy's dominance of the presidential race by cutting a dashing figure using the then-new medium of television, might Edwards win in 2008 by adeptly using the web's new social tools?

Watch the video below or here: