We've looked at the top searches in 2006 for Google, Yahoo, Microsoft, AOL, and Lycos previously. Now we turn to the dark horse of search engines, Ask.com. As befitting its early stance as a search engine for novice web users (remember Jeeves?), Ask's top searches were dominated by more general search terms like dictionary, games, and music.

Interestingly, "song lyrics" and "poems" came in at sixth and seventh places, respectively, which indicates that Ask users may be predominantly female. You'll also notice that "baby names" placed strongly at number 8.

As with Google and Lycos, MySpace at number one was similarly popular at Ask, which might be puzzling initially since it's such a specific search term. However, notice that MySpace caters mainly to the unsophisticated user who isn't above stuffing her profile with every widget, gadget, and embed she can get her hands on. MySpace appeals so strongly to general users that it even beats out American Idol, which comes in last. 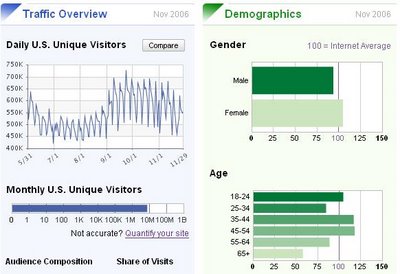 Let's look for some confirmation for these speculations. Based on Quantcast's analytics data for Ask.com (above), we can see that Ask skews slightly more female and attracts an older audience. It looks like we're on the right track. In fact, I'd say that Quantcast's data might be under-representing Ask's older/female audience.