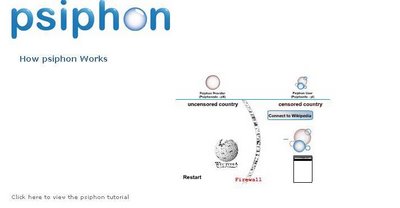 Psiphon is a new program developed by a team at the University of Toronto that lets users in countries that censor the web access restricted sites. The New York Times describes how it works:

Psiphon is downloaded by a person in an uncensored country (psiphon.civisec.org), turning that person’s computer into an access point. Someone in a restricted-access country can then log into that computer through an encrypted connection and using it as a proxy, gain access to censored sites. The program’s designers say there is no evidence on the user’s computer of having viewed censored material once they erase their Internet history after each use.

While Tor, another program that lets users bypass censorship and surf anonymously, is open to the public, Psiphon is meant to be shared by private groups that know and trust one another. A login and password are necessary to use someone else's computer as a Psiphon proxy.

Psiphon looks like an interesting, parallel effort to bypass censorship, but its very design does limit its usefulness for users who aren't fortunate enough to know the right people. Still, while Tor proxies might be common knowledge and thus easily blocked, Psiphon proxies should be more resilient to detection.

Psiphon will be available December 1.