How to Get Songs OFF your iPod

iPod users know how easy it is to get songs onto their iPod, but doing the reverse is more complicated. It's probably one of the more annoying "features" of an iPod that's meant to deter users from sharing songs from one iPod to another. Seth Godin has a good post on this sort of approach:

Here's the short version: If you try to teach a customer a lesson, you've just done two things:
a. failed at teaching a lesson
and
b. lost a customer

Of course, it doesn't seem to have hindered the popularity of iPods.

There are software approaches to moving songs off an iPod, which are simpler for most users, and ways that require a little modification of your folder settings. 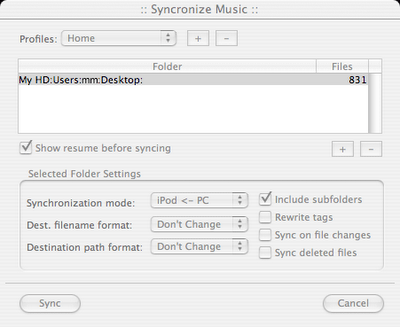 YamiPod is a handy tool that lets you manage your iPod under Windows, Mac, and Linux. It has a lot of features and is available in 28 languages.

CNet has a short tutorial for Windows that doesn't involve new software that essentially treats an iPod as an external hard drive and has to do with showing hidden files. The Mac tutorial is here.

Update: Wired has short reviews of several other iPod rippers including Senuti, iPodRip, and iPod Access.

How to Get Songs OFF your iPod