The Rise of Specialized Social Networks (Plus a Review of SocialPicks) 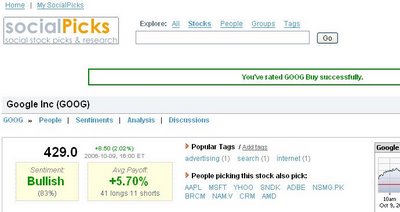 SocialPicks is a social networking site for stock pickers started by a bunch of Stanford grads. Like some other MySpace clones, they are trying to appeal to a narrower subset of the larger user base. If you're a fan of David Ricardo, this has the familiar ring of specialization whereby one "country" (social network) may have an advantage at "producing butter" (appealing to stockpickers) and one better at some other task (say, appealing to sports fans). It follows then that the first site should focus on investors and not on sports fans and vice versa.

Social networking really started to get popular with MySpace and Facebook (itself specializing in the college demographic, at least before they opened up sign-ups to everyone recently) and had a diffuse goal of connecting people who didn't know each other. A very general approach was tried in eliciting personal details from people, and these sites tended not to focus on any one thing. Now, upstarts are beginning to eye the emerged market, and it remains to be seen whether these specialized social networks can gain traction.

What is the problem that SocialPicks solves? This is how they describe it

We looked around on the web and found that a lot of investment sites tell you that the way to become a good investor is to put in the hours and learn how to properly determine an investment's true worth. That hasn't changed, but we don't think that people are therefore destined to adopt a lone wolf approach to investing. We've learnt through experience that if you put sharp people together, they feed on each others' strengths and can pool together a broader set of resources and ideas.

Based on a quick look around, the site is easy to navigate with tabs for stocks, people, groups, and tags. While no feature is particularly groundbreaking, the design is simple and soothing. You can indicate whether you're bullish or bearish on a stock and input what percentage of your portfolio you want to put into it to track your stockpicking accuracy. For those who are fans of Jim Cramer, he's apparently on the site with an accuracy rating of 59% on his picks. A little better than a coin toss, but it could be profitable assuming transaction costs and slippage don't zero the profit out.

The social networking aspect can be found in groups that users can join to discuss specific topics. Right now, the Bull Trader Group is the largest at 11 users, but there hasn't been any "socializing" yet. Users can customize their profiles just like in any other social networking site and also add friends.

SocialPicks is optimized for social stockpickers so in that sense it has a potentially huge user base, which for the moment has to content itself with message boards at, say, Yahoo! Finance. Certainly, users who are on other social networking sites like MySpace would find it attractive because MySpace has no features that appeal to investors wishing to discuss stocks. Still, it's not all smooth sailing. SocialPicks does face competition from Zecco, another social network devoted to stocks although Zecco seems to want to dominate the entire "value chain" as investors move from discussing stocks to trading them with real money.

So, it remains to be seen whether users are willing to fracture their attention online between general purpose social networks and more specialized ones devoted to stocks and sports. As the number of niche social networks increases, that tension will eventually lead to either a shakedown in the number of social networks or possibly the rise of "gated communities" that don't connect to each other except peripherally.

If you want to take a testdrive of SocialPicks, I've got 20 invites so either email me asking for one or post your address in the comments.

The Rise of Specialized Social Networks (Plus a Review of SocialPicks)