Are there simply too many social networks around? Is the user base too thin to support so many competing social networks? Perhaps there just aren't that many users who are willing to participate. I blogged earlier about why users don't participate (something having to do with the 90-9-1 rule), and it boiled down to the "fact" (more of an observation) that it seems like no matter where you look, in any given community, only about 1% of users actually contribute to any significant degree. Even when the setting is simplified so that "participation" consists of clicking on a bunch of stars to rate a YouTube video, I found that that rule was consistent.

Now, one reason the 90-9-1 rule may not hold for social networks is that they are essentially blank slates that users can fill in with whatever they want. They are generic, for the most part, so users can feel free to manipulate the templates and be creative whereas on, say, Amazon or your favorite message board, there is a structure to the discourse such that users can't just do whatever they want. There is an expectation, a funneling of contribution toward the communal mean. With a MySpace, that isn't quite true. True, there is still structure, but it is loosely defined, which is in part why you get psychedelic site designs that tend to give you a headache when you look too long.

If you believe that people have an innate inclination to share what they feel and experience with others, then it follows that so long as there are platforms for expression there will be quite a few users willing to hold forth. It may be instructive to look at the blogosphere (there is more data readily available on blogs than social networks). 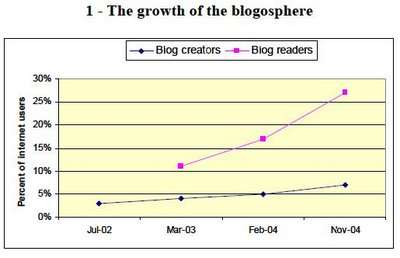 The above figure from the Pew State of Blogging poll (PDF) shows that bloggers have grown to about 7%, or about 8 million people. Most of these update their blogs once a week or less. 62% don't even know what a blog is. As to abandoned blogs, Perseus Development Corp. found

that 66.0% of surveyed blogs had not been updated in two months, representing 2.72 million blogs that have been either permanently or temporarily abandoned. Apparently the blog-hosting services have made it so easy to create a blog that many tire-kickers feel no commitment to continuing the blog they initiate. In fact, 1.09 million blogs were one-day wonders, with no postings on subsequent days. The average duration of the remaining 1.63 million abandoned blogs was 126 days (almost four months). A surprising 132,000 blogs were abandoned after being maintained a year or more (the oldest abandoned blog surveyed had been maintained for 923 days).

These findings indicate that while it may be easy to get users to start contributing, in many cases, these users are just kicking the tires, trying the service out, but not committing in any real sense. About 25% of the blogs surveyed were created one day and abandoned the next. I've been citing a statistic in previous posts that I've read indicating that one million bands have signed up for MySpace accounts, and I have to wonder how many of those are one-day wonders. Does MySpace count bands that haven't updated their pages since day one as part of that one million?

Let's see. The abandonment trend is quite evident in MySpace as well. The Economist reports,

Another attack on MySpace has come from Jupiter Research. One of its analysts, Nate Elliott, has said that one of the website's favourite statistics, its 55m or so registered users, is a “mirage”. Half of people who sign up to social networks stop visiting after a month or so, he says. And although MySpace's unique user and page view numbers are impressive, he says, the likelihood is that a small share of its visitors generates most of the page views.

Again, we see the 90-9-1 rule in effect. A small minority of users contribute the majority of content, page views, and whatever else you care to name. It appears that most "users" don't stick around for long. If the social networking market weren't saturated, we would see an upward trajectory in the number of active users. This is a piece of data I haven't been able to find. Most sources don't distinguish between active and inactive, but from the data thus far, I suspect that the growth of the user base will start to plateau at least until more people are connected to the Internet, and fresh blood can renew the tepid growth rate. The users that are interested in participating in social networks are likely to already be active participants while those who aren't have discovered that in themselves and given up contributing. Increasing competition from specialized social networks will also play a role in slowing the growth of generic networks like MySpace.

Even though I happen to suspect that the social networking market may be saturated, I don't think that the MySpace acquisition was a mistake for News Corp. The 90-90-1 rule may rule in cases where users contribute without coercion or particular incentive, but at MySpace, corporations, bands, and other publicity-hungry parties have a great deal of motivation in contributing to the social network. That's where the money is. The massive user base that is claimed is just a mirage that is used to hype the service and drive more traffic. A big network is more valuable than a small network because of scaling effects (a sort of n-squared rule). There are simply more "friends" you can make, and more consumers you can market to. In some ways, I think the social network phenomenon is illusory, driven by selective interpretation of the data and the hope of latching onto the next big thing.

I do have a very simple answer to Ajit's question: Social networking sites are no different from any other site or service. There is a first mover advantage where the first company or site to gain significant traction will gain an insurmountable lead. For instance, the majority of web searches are done through Google, Yahoo!, and MSN. The other search engines (even very impressive ones) are simply outclassed. The example isn't watertight since search engines don't have as much of a vendor lock-in effect that a social network has since users are more deeply embedded in a site like MySpace than Google. The value of MySpace's network is so great precisely because it has so many users. New users go where the number of potential friends is greatest, and MySpace is king in that area.

This update is getting a little too long. Further thoughts here.