Ashley Harkleroad will be appearing in nude photos in Playboy's August edition. The 23-year-old tennis player first riveted the tennis world's attention with a racy outfit at the 2001 US Open when she was just a minor. Harkleroad has often been compared to Anna Kournikova for her blatant use of sex appeal, and her Playboy appearance just furthers the comparison.

Asked about her decision to appear in Playboy, Ashley Harkleroad replied, "I thought about it, and it was something that I did. I'm proud of my body. I was representing a female athlete's body." This comment was made after her defeat in the first round of the French Open against Serena Williams. In a record, Ashley will be the first tennis player to grace the pages of Playboy.

Ranked 61 in singles and 145 in doubles, Ashley Harkleroad reached her career height of 39 in 2003. She was married to ATP Pro Alex Bogomolov, Jr. for two years before they divorced in 2006. Currently, Ashley is engaged to another ATP Pro, Chuck Adams.

But Ashley's tennis career hasn't come without a cost. She lost an ovary at the Sony Ericsson Open after a cyst in one of her ovaries burst. Perhaps a scar from the operation will be visible in Harkleroad's nude Playboy photos. 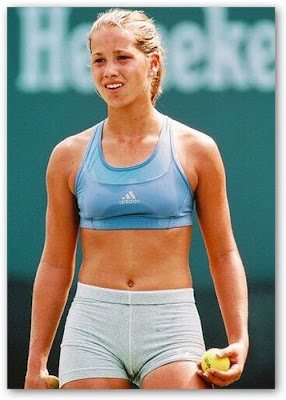 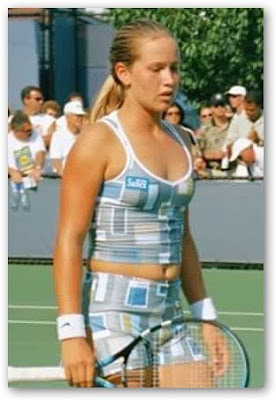 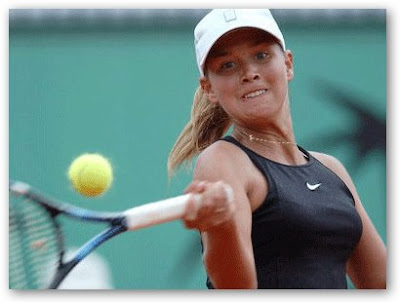 See more Pictures from Ashley Harkleroad in our german news blog on:
http://www.tutsi.de/ashley-harkleroad-nackt-im-playboy-harkleroad-nude-pictures/2008/05/28/tutsi-blog-aktuell/

check out the Ashley Harkleroad Fansite at

Ashley is a big girl she can make up her mind on her body..nude or clothe ...she has rights so leave her alone with me in the same room for few hours...

The pics are out - see them here

Or you can see the tits here too...

Come on, let's be real here. So Harkleroad went for the money, despite her disingenuous "reasons she can't go into now?" (I'm dying to know what those other reasons could possibly be!)How can we blame her? It's her body and her moment in the sun. Face it. she's never going to make as much money based on her tennis skills as Playboy undoubtedly paid her. She's scarcely going to bring women's tennis into disrepute. Hell, she's hardly known as a part of the tennis world. It's her ego and her wallet, let her pad them both in the only way she can, while she still can.

Update - The above link was brought down by Playboy.
Check out the new link -

Thanks for the link
http://playboyplaymatescenterfold.blogspot.com

Superb Collection. You can spend days there! :-)

I actually don't think Ashley is all that beautiful facially but I guess that's not what posing nude is all about. It's really about showing off your body and she does have an incredible body!! Tan and built! When you have a body that beautiful (that she probabbly has to kill herselgf in the gym to maintain), why not pose nude?

Check out the Hottest Athletes of the Olympics