Channel Chooser is one of the biggest free online TV outlets with upwards of 40,000 viewers regularly watching its streams each day. You use a responsive Flash interface to choose channels from categories like entertainment, music, and sports.

Channels like MTV, Bloomberg, and Adventure Movies Channel are among the more popular of the 303 choices that you can watch through Channel Chooser. Oftentimes, though, you'll be redirected to the main sites of channels like HBO and Sci-Fi Channel. From the looks of it, Channel Chooser is running a completely legal online TV service since it only links to video streams that the channels put up themselves.

You'll need Windows Media Player and Quicktime in order to watch the streams. For those on the go, there's even a mobile version of Channel Chooser, which, by the way, give you the direct links to the TV channel streams. 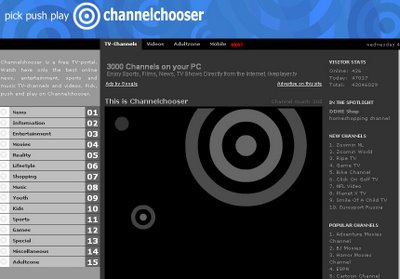 These sites are getting out of date now with all the networks showing free tv. Newer sites like this one are better
tp://www.worldtvpc.com/onlinevideosites