Disney to Launch Social Network: Is It Destined to Fail?

Disney is following Wal-Mart's footsteps into the social networking world, by launching a sanitized version of MySpace on its outdated Disney.com property. Due to launch next week, the new Disney.com will feature the traditional features of a social network: profiles, videos, and chat plus a side of parental controls.

Now, a big part of MySpace's success has been attributed to its lack of constraints on users' actions: like a teenager's bedroom, you can keep it as clean as you want, or make a complete mess. It's up to you. In another possible misstep, Disney is also planning to sell subscriptions to the site.

All of this has me thinking of Wal-Mart's disastrous The Hub, which let users upload pictures and videos and create Wal-Mart-based fashions. The attempt, widely seen as a prelude to a more permanent presence in the social networking space, failed as a result of strict censorship of user profiles and was shut down after 10 weeks of tepid growth.

Of course, Disney may primarily target its site to its core audience, pre-teens and tweens, so censorship might not be an issue. But will they still offer 0% APR ads on the site like they do now (see screenshot below), or can parents censor those too? 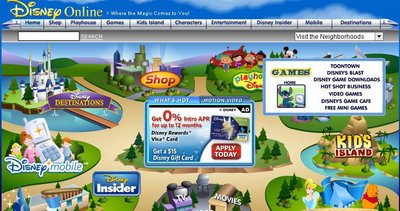 Disney to Launch Social Network: Is It Destined to Fail?

Don't be suprised to see credit card ads on Disney.com. The site has huge traffic numbers from kids and adults alike. Lap-surfing with mom and kids is huge...mom see's ad while surfing with Timmy looking at Dora?

It's more the principle of the thing. After getting rid of the violence, sex, and other "inappropriate" content, Disney still leaves the path to financial self-destruction open.