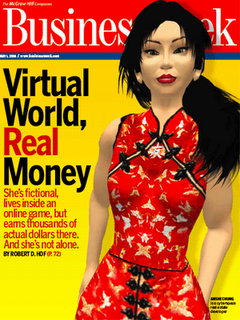 Anshe Chung, the avatar of Ailin Graef in the virtual world Second Life, has announced that she is the first person (?) to become a virtual millionaire. You might have seen her on the cover (left) of BusinessWeek back in May. Second Life's virtual economy is run using Linden Dollars, which can be exchanged for US Dollars, and is primarily real estate based.

Anshe Chung's achievement is all the more remarkable because the fortune was developed over a period of two and a half years from an initial investment of $9.95 for a Second Life account by Anshe's creator, Ailin Graef. Anshe/Ailin achieved her fortune by beginning with small scale purchases of virtual real estate which she then subdivided and developed with landscaping and themed architectural builds for rental and resale. Her operations have since grown to include the development and sale of properties for large scale real world corporations, and have led to a real life "spin off" corporation called Anshe Chung Studios, which develops immersive 3D environments for applications ranging from education to business conferencing and product prototyping.

Now, how soon do you think the German tax authorities come after Mrs. Graef's virtual assets?