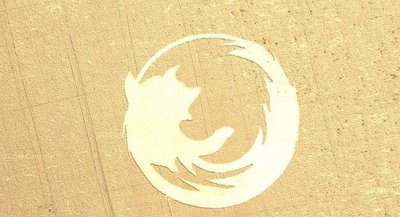 Firefox fans at Oregon State University dreamed up the idea of creating a Firefox crop circle and completed it in August. Only now has Google Maps been updated to include it.

Planned in under two weeks and completed in under 24 hours, the crop circle had a final diameter of 220 feet. We constructed the circle in an oat field near Amity, Oregon, where it was completely invisible from the road but unmistakable from the sky. Our team consisted of 12 people, mainly OSU students, and we carefully stomped down oats from 3:30pm Friday afternoon until 2:30am, putting on the finishing touches between 7:30am and 11:00am Saturday, August 12.

More on the step-by-step creation of the crop circle.