« Home | GSpace Firefox Extension Bought for Undisclosed Sum » | Download High Quality PDFs for Work, School, and Play » | Get Aging Tabs in Firefox » | Search for Torrents with GoogleTorrents » | Yahoo Shopping Gets New Look for the Holidays » | Search as Shopping » | Is your Right-Click Menu Loading Too Slowly? » | Need a Profile Picture for Your Social Network? » | How Long Have You Spent Online? Two Useful Firefox... » | Revenge of the Portal? »

Technorati's David Sifry posted his quarterly State of the Blogosphere report today, and many interesting findings were highlighted. The one that struck me the hardest was the relation between authority (how many blogs linking to your blog) and blog posting frequency. Essentially, what are the common characteristics of top bloggers? 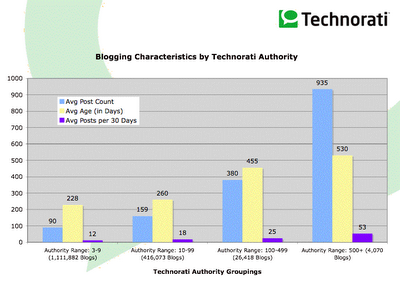 Sifry finds that there is a direct relationship between authority and blog posting volume. In the low, middle, and high authority groups, there isn't much variation in posting frequency or blog age (number of days a blog has been in existence). To get to the high authority group (500 or more blogs linking), it simply takes persistence. It's how long you've been around not how much you post (averaging about 18 posts a month).

However in the very high authority group (more than 4000 blog linking), there is a sea change in behavior. Posting volume doubles, and blog age is about 4 years. (Yes, I lied: there are only two habits: post often and post persistently)

Other findings:
State of the Blogosphere, October 2006