Personalized Content vs. Power of Masses: Which Will Prevail?

Emre Sokullu over at Read/WriteWeb has written an interesting comparison of various personalized news services that attempt to use machine learning and statistical analysis to filter content from blogs, traditional news sources, and other miscellaneous media and deliver a personalized feed of the latest news that interests you. While such a task is still in the early stages, the potential is so great that there are several competitors to current leader, Reddit. The other great attempt at filtering all the news that's fit to print uses what's called the Power of Masses. It boils down to whether information can be better filtered by man or machine, the crowd or the algorithm. 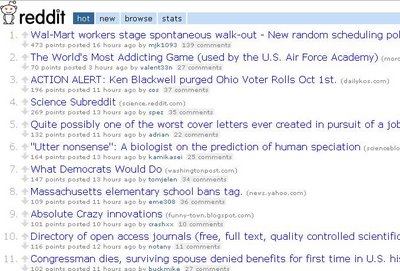 As I blogged earlier, I tend to see Web 2.0 as, fundamentally, a race to see who can better pre-process, sort, or filter the ever increasing amount of information on the web (solving the information problem). By information, I include the news, but also other metrics that can be used to differentiate objects of interests. For instance, the "value" of a user as determined by the number of friends she has on MySpace. That tells you something like whether this user might be usefully recruited as corporate spokesperson because of her appeal in the social networking community, or perhaps whether she would be a compatible "friend" to make. The information problem social networking sites need to address is this, namely, "Is 'Allison' or 'De evilest 1' someone I want to befriend?" (eHarmony, the dating site, approaches this problem through a personality profile.) 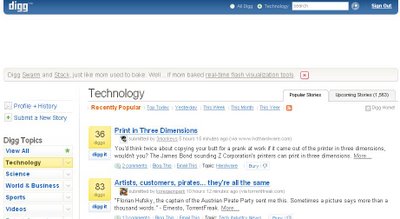 Sites like Digg epitomize the concept of the Power of Masses, or wisdom of crowds. It's a relatively democratic process by which users vote for stories they like. As the Alexa traffic graph below indicates, Digg is much more popular than Reddit. 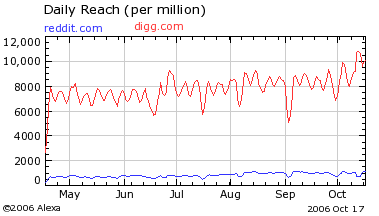 I think this is due to a couple of commingled factors: the communal nature of Digg and bad algorithms of personalized content sites. First off, Digg users seem to share a lot in common so stories that get filtered to the front page tend to interest most of the community. In comparison, Reddit's front page contained more diverse and less tech-related stories. Demographics are important. The majority of users who are joining the Diggs and Reddits of the web are likely to be tech savvy so a site that appeals to its user base's geekier impulses will be more appealing. Digg, for instance, has a bunch of neat tools that appeal to the geek demographic. 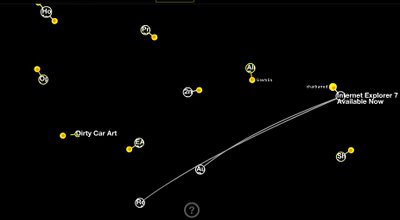 Reddit is unique among the personalized content sites because it also implements a Digg-like voting system, which I think will help keep it competitive against longtime rival Findory and newcomers like Feed 2.0. These personalized content sites appear to use algorithms that take into account keywords within stories that you read as well as the reading profiles of similar users to recommend stories that would interest you. That takes away the communal feeling that Digg possesses. Social media versus solitary media. The social aspect of Digg and other power-of-masses-based sites is a major part of their attraction. Collaboration and interaction make the information search and filtering process exciting and compelling (Google Image Labeler is an excellent example. transforming the monotonous task of labeling images into an interactive game).

Of course, a simpler explanation may be that Digg just looks more exciting. Digg is more colorful than Reddit, using yellows and blues liberally. Reddit, by comparison, is gray and white. Very boring colors.

The algorithms used by personalized news sites need significant improvement. At the moment, it might be easier to look in the Sports section of a news site to find sports stories, or rely on the wisdom of other users in voting up interesting sports stories as per Digg. Though I think Digg-like sites have structural advantages over personalized news sites, the next couple of years are likely to see significant improvement in natural language processing with search engines and personalized content sites racing to perfect it. Along with better algorithms, Reddit and its competitors will also benefit from increased awareness among the general public of their existence and mainstream use of personalized content services.

Personalized Content vs. Power of Masses: Which Will Prevail?