« Home | Search for BitTorrent Downloads with TorrentScoop » | Watch All of TV Online: Streaming Episodes of Hero... » | Top Blogger Salaries: Can You Make a Living Blogging? » | Find New Music Videos with MusicMesh » | The Attack of the Killer iPods » | The Pirate Bay Gets Hacked; User Database Stolen » | Watch Movies on Demand at MovinFlicks » | Bypass Megaupload Download Slots Limit with Firefo... » | Watch Internet TV on Your Computer » | How to Disable the Windows Automatic Update Restar... »

Full Episodes of Lexx and Starhunter on Joost

Joost users will soon have to stop complaining about the lack of content on the online video service. Though they don't exactly set the high water mark for science fiction television shows, episodes of Lexx and Starhunter can be viewed in high definition on Joost. Look for them on channel 25, the Alliance Atlantis Sci-Fi channel.

In case you've never heard of either Canadian-produced shows, Starhunter follows the adventures of a bounty hunter looking for his missing son, and Lexx chronicles the misadventures of a group of eclectic characters along with liberal doses of sex and nudity. 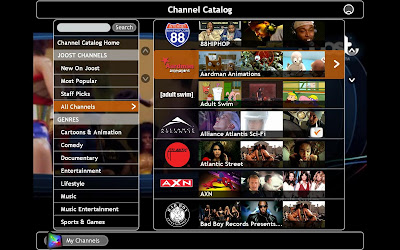 Full Episodes of Lexx and Starhunter on Joost