Top Blogger Salaries: Can You Make a Living Blogging? 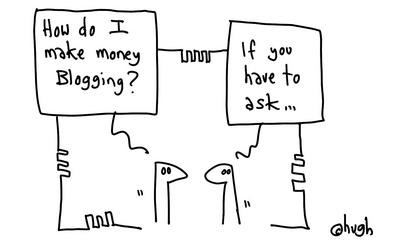 There's nothing like a healthy dose of envy and competitive drive to motivate you to make your best effort. If you're a blogger looking to make some extra cash on the side or even considering making a blogging your primary job, the first thing you want to know is: Is it possible to live on a blogging salary?

It's always useful to look at the prospective competition.

So who's making money blogging? Well, at the top of Paula Mooney's list is PlentyOfFish's Markus Frind, who's less blogger and more of a dating site entrepreneur. His estimated annual salary is $3.65 million, but most of that isn't from blogging so you should probably ignore him. You can similarly disregard about half the people on her list because they make money mainly from side ventures, and not primarily from blogging.

Steve Pavlina is probably the highest earning pure blogger entrepreneur on the list. He makes an estimated $1000 from his personal development blog. He sets a loose upper limit as far as a one-person blog goes. Developing a blog network like Jason Calacanis of Weblogs fame is a helpful way of making the economics of blogging scale.

More than half the list, or 31 bloggers, earned less than $15,000 a year. Only 18 out of 60 made more than $120,000. Remember, this list is self-selected: not all bloggers choose to publicly disclose their earnings. So it's likely to be unrepresentative of the vast majority of bloggers, but even so, we can see that most bloggers couldn't afford to survive on their blogging salaries alone.

As in most fields, a small minority reaps a disproportionate piece of the earnings. The best way to figure out how to make money from blogging is to learn from the best. Follow the source links on Paula's list to get explanations and breakdowns of where earnings are coming from. You might also want to look at a Google spreadsheet to understand how the salaries were computed.

Top Blogger Salaries: Can You Make a Living Blogging?