While shopping around for holiday gifts, I came across a poll on Amazon.com's homepage asking customers to vote for one of four deals ranging from a $30 Tickle Me Elmo to a Zune for $90 (my bet's on the Zune, natch). The program is called Amazon Customers Vote, and it looks like it's been around for a while since it's on round four. Basically, it's a lottery. You vote for a deal, and if it wins, you will be eligible for a chance to get a claim code for that deal. Since there are only 1,000 to 2,000 units of each deal available, your chances depend both on voting correctly and the number of other users who voted. If the deal you vote for doesn't win, you still get a chance to get a claim code for the winning deal, but your discount is less. 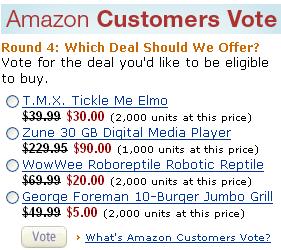 Online shopping is becoming shopping 2.0 with users actively participating with one another during the buying process, and I find it interesting that a Web 1.0 retailer like Amazon is starting to embrace aspects of it. This sort of interactive deal shopping reminded me a little of Jellyfish, which uses limited supply and user participation to sell one type of item a day. Jellyfish, of course, is much more complicated, framing the buying process as a Dutch auction. Ultimately, I'd guess that online shopping is eventually going to resemble shopping at the mall except you actually interact with the other shoppers instead of walking past them.