Migratr is a simple application that lets you migrate photos from one photo sharing site to another. It automates the task of downloading hundreds or thousands of photos from, say, Flickr and re-uploading them to an account at another photo site. 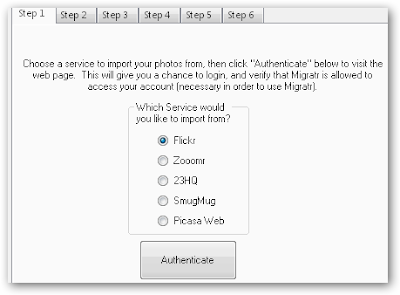 Currently, Migratr supports moving photos among Flickr, Zooomr, 23HQ, SmugMug, and Picasa Web, but there are plans to include support for Yahoo Photos.

You can not only use Migratr to move photos from one site to another, but also use it as a general-purpose photo uploader by skipping directly to step 4 in the process. Just authenticate Migratr and choose the directory you want to upload photos from in step 6.